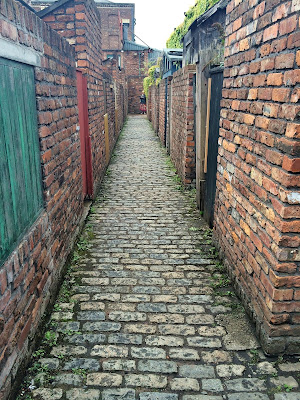 Perhaps you enjoy a flutter on the horses. Contemplating the fitter of two flies crawling up a wall.

However, there are bets and bets. Some bets can only be described as strange.


A smart bet. During the 18th century a butcher named Mr. Bullock challenged the Earl of Barrymore to a race, with a huge wager on the result. Barrymore accepted the butcher’'s bet. The butcher was fat, unhealthy, while he was fit as a butcher's dog!

However, the butcher had two demands. The first, to be given a 35-metre head start in the race. The second, that he be allowed to choose the course. The Earl of Barrymore, being a good sport, agreed to these conditions.

The butcher had planned his wager very carefully. The race would take place in Black Lion Lane, one of the narrowest streets in Britain. On the day of the race Mr. Bullock made the most of his head start.

The Earl of Barrymore caught up with his portly opponent.

However, the Earl literally ran into trouble! The street was so narrow it was impossible for him to pass the butcher such was his build. With no way into the lead, the Earl of Barrymore had to settle for second place.

Mr. Bullock won his bet.
Photo: Pixabay free no attribution
Posted by TO