Finally something to smile about-Here’s Punchestown! 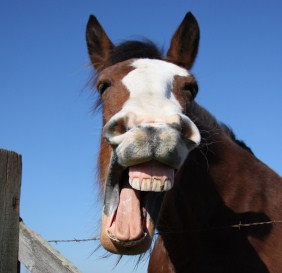 With the Punchestown Festival just around the corner, I believe that I have pulled off a real scoop for my blogs readers In the form of a guest post written by Cathryn Fry co-author, with Jonathan Pollinger, of the extremely informative and profitable to follow  JPFESTIVAL.COM – CHELTENHAM FESTIVAL PREVIEW 2012 blog.
You can also follow Cathryn on twitter at: @CathrynFry and view her brand new blog here: The Winners Alright


Over to you Cathryn:
The 2011 Punchestown Festival is nearly upon us! Described by many as the highlight of the Irish jumps scene & often referred to as the Irish “Cheltenham” There is said to be a unique atmosphere at Punchestown, I make my Festival debut there this year & I can’t tell you how much I am looking forward to that!

Running from Tuesday May 3rd – Saturday May 7th, the highlight of Tuesday is the Grade One Boylesports.com Champion Chase. Here the first four home in the Queen Mother Champion Chase look set to lock horns again. Golden Silver who ran a blinder in the QMCC considering Cheltenham really isn’t his track won this race last year with this year’s QMCC hero Sizing Europe back in third. 2010 QMCC winner Big Zeb joins them this year after his second to Sizing Europe at Cheltenham as does Captain Cee Bee who ran with distinction when third in this year’s QMCC. Changing Course & J’y Vole make up the 6 strong field at the 5 day stage. This race is almost certain to fall to one of the big four, but which one, I can’t call!


Also on the seven race card on day one is the Grade One Evening Herald Champion Novice Hurdle, run over 2 miles. Amongst the entries are the 1st and 3rd from the Neptune; First Lieutenant & So Young. First Lieutenant rallied so gamely to beat Rock On Ruby in the dying strides at Cheltenham. The drop back to 2 miles will not inconvenience him as he won the Future Champions Novice Hurdle over 2 miles at Leopardstown and has course & distance form from his maiden hurdle win at Punchestown in December. So Young 4 ½ lengths behind First Lieutenant in the Neptune has a mighty reputation and had impressed some shrewd judges before his trip to Cheltenham. There is much more to come from this fella & he is firmly in the exciting bracket. Also in the line up are: Hidden Universe, winner of last year’s Champion Bumper at the Punchestown Festival. He finished 12th to Al Ferof in the Supreme Novices, Far Away So Close 9th in the Supreme and a winner at Aintree in the Handicap Hurdle for Conditionals & Amateurs, Oilily who ran a blinder when 2nd in the Grade Two Top Novices at Aintree & 2nd to Hidden Universe in that Bumper last year, Rathlin who was 6th in the Supreme Novices before blundering away his chance of victory in the Grade Two Novice Hurdle at Fairyhouse over Easter. The winner of that race Prima Vista holds an entry too along with Tornado Shay who finished 4th in the same race. A fascinating contest, it would be no surprise to see So Young emerge victorious.


Wednesday is Punchestown Guinness Gold Cup Day. There will surely be a few tears if Kauto Star can win this. At his peak defeat would have been out of the question, can he still do it? You have to say yes. Without a doubt the biggest threat arises from Joncol who has been a very sick horse this season and has still performed with credit. He won the 2010 Irish Hennessy, is class through & through & would fully deserve victory here. Kempes has to also rate as a big danger as well as winning this year’s Irish Hennessy he was travelling very well before unseating A.P McCoy in the Lexus Chase. He has won over the exact course & distance as has Rare Bob. Nacarat made all to win the Grade One Totesport Bowl at Aintree last time out. The one concern with him lining up here would be that all of his best form is on flat track and Punchestown is undulating. Tranquil Sea is an exceptional Horse but clearly needs soft ground too be seen at his very best. A tough race to call with question marks over every horse, but please Kauto show us that star quality just one more time! They may just need a new roof on the Grandstand if Kauto jumps the last in front! King Kauto-a living legend!


Thursday gives us The Ladbrokes.com World Series Hurdle which begins and ends with one word; Quevega! Winner of this race last year and now a triple winner of the David Nicholson Mares Hurdle at the Cheltenham Festival. It’s hard to look past this extraordinary mare but the main danger looks to be Mourad who ran a fantastic 3rd in the World Hurdle behind Big Bucks & Grand Crus.  Other exciting entries include: Thousand Stars 4th in the Champion Hurdle & only beaten a neck by Oscar Whisky at Aintree over 2m4f, Rigour Back Bob who ran a blinder to finish fifth in the World Hurdle, Dunguib who steps up to 3 miles for the first time and is definitely not one to write off just yet, Majestic Concorde who was running a mighty race before unseating in the Grand National & Voler La Vedette who thrilled with a game performance at Fairyhouse over Easter. Although Quevega may not be able to turn this race into the procession that became the Mares Hurdle, surely this belongs to her?


Friday is the day that pulls in the biggest crowds & is Rabobank Champion Hurdle Day. What a race this looks to be & I am indeed pinching myself that I will be there to see it & the apple of my eye & reigning Champion Hurdler Hurricane Fly! He is the victor of 8 Grade One wins & counting still! Winner of this race last year, hasn’t been out of the Winners Enclosure since. He didn’t just silence his critics at Cheltenham, he sent them into orbit! There is seemingly one answer to the Rabobank Champion Hurdle and that is Hurricane Fly! His opposition consists of: Binocular, the 2010 Champion Hurdler who missed this year’s race in bizarre circumstances, he then put in a below par effort over 2m4f last time out at Aintree. As we have come to know about Binocular he either impresses us or leaves us scratching our heads! Take nothing away from him & what he has achieved but he surely has more than met his match in the Fly? It will be interesting to see them finally race against each other but the outcome is pretty easy to call, Menorah 5th in the Champion Hurdle, had previously impressed in the Greatwood & The International. Plenty more big days await him but looks set for a place here, Starluck heads back to hurdles after a chasing campaign that heralded mixed success has great speed but again no match for the Fly. Those who also hold entries in the World Series Hurdle are: Dunguib, Quevega, Luska Lad, Thousand Stars & Voler La Vedette. I know there is no such thing as a certainty in Racing but this looks as close to being one as you can possibly get, come on The Fly, you little beauty!


Saturday gives us the AES Champion four year old hurdle. Hopefully there will be enough cut in the ground to allow star filly Unaccompanied to take her chance. A great 2nd to high class Zarkandar in what was an above average Triumph, she then slammed St Nicholas Abbey on the level at the Curragh. Before her Triumph 2nd she was an impressive winner of the Spring Juvenile at Leopardstown. If she makes the final line up it looks certain to go her way. Challenging her are: Grandouet who was 3rd in the Triumph & then brought down when holding every chance in the Grade One Juvenile at Aintree, Third Intention; 7th in the Triumph then stormed home at Cheltenham’s April meeting by 8 lengths in the 2m1f Novice Hurdle, Kumbeshwar who really served it up to Zarkandar at Aintree and went down fighting by only 1 ¼ lengths, What a Charm who conquered Kumbeshwar at the Cheltenham Festival in the Fred Winter & Sailors Warn 6th in the Triumph and 2nd to Unaccompanied in the Spring Juvenile. On paper it bears all the hallmarks of being just one of the great races that we will see played out on the County Kildare turf throughout the week.


Whether you are going to Punchestown or watching at home or in the bookies, enjoy every race & every moment. This is what life is all about!